In April of 2007 my husband Dale and I became parents to a new bundle of joy. Being a blended family, this was our first child together. For those you who know our age, let me be clear – a furry and four legged nine week old Sheltie. After much conversation we named him Ernie. Ernie is now almost 6 years old. He has finally become an official Therapy Dog, after 4 long years of training! Unlike Max, his predecessor, Ernie is more interested sleeping under a desk, than helping people through their grief journey or feeling uncomfortable while in a funeral home. Slow but sure, with the assistance of Kris Larsen, on behalf of Therapy Dogs, Inc. (TDInc.) and the many hours of our dedicated Clock Funeral Home family, we can now complete his registration papers. TDInc. Is an amazing organization that is dedicated to providing registration, support and insurance for members who are involved in volunteer animal assisted activities.
From the day we brought Ernie home, he has come to work daily with both Dale and me. Ernie initially was cage trained and had either blankets or cages in many of the employee offices within the funeral home. Since day one, under the recommendations of Kris Larsen we began an “in-house” training program”. The 1st goal was for Ernie to be comfortable with his new surroundings – which included no barking at the dreaded doorbell! Slowly we introduced him to crucial people in his life other than his funeral home family…aka “ the mailman”, “UPS Man” and “Fed Ex Man”. They have all learned to bring biscuits, or know where to find them when they arrive. For what ever reasons, this is big fun to Ernie! In fact, he now has copied an old trick that Max did in the previous years. When the mailmen or Fed Ex stop to use our bathroom on the way out, he sits at the door and waits for them to leave and then escorts them out for a two treat stop. Nothing and I mean nothing will interrupt his focus when this occurs. Over the years Ernie has become desensitized to practically everything. Not much phases him.
Through out the years we have all recognized that Ernie has personality quirks and behavior patterns, just like his human counterparts. Overtime we have come to understand that his actions and behaviors, have meaning behind them. Here are some of the things we have learned.
1. He does not like the guns shots from the military services. When he seen the Veterans arrive in their uniforms to conduct a service, Ernie immediately retreats to the farthest office from the front of the chapel and remains there until the ceremony is over.

2. It appears he is prejudice. He does not like African Americans, Considering our primary funeral home is located in the heart of downtown Muskegon, MI and the Heights are not far away this is not a good thing. What is funny about this is that we have a culturally diversified employee base. Apparently he doesn’t seem to notice this. For years we had to ask our employees to bring in their friends or family to visit, so we can have Ernie become familiar with cultural diversity,

3. It also appears that he’s not a bad judge of character. What I mean by this is, Ernie always backs away and does not want to be in the arrangement rooms when our directors are making arrangements with families who don’t have the ability to pay for any or all of our services. At first we thought he was being lazy and wanted to sneak out on his job. Nope, it appears that he was on to something. Our directors have now come to realize that when he starts to behave in a certain way, that Ernie is communicating to us that there are little or no financial means to pay for their loved one’s funeral bill.

4. Last but not far from least Ernie trusts everyone here as they have all participated in his development, even potty training. Ernie is not shy about letting someone know when its time to GO!!!!
When Ernie was 6 months we introduced him to his “working jacket” known as a saddle. What else can I say, he hates it! Under protest he will wear it, and then then he pouts. He prefers to run around nakey! It’s become a game and is hysterical to watch. He literally runs away from me, puts his ears back and head down when he realizes its time to be dressed. Four legged kids are no different than 2 legged ones. Just like when we were human parents, as a pet parent, we still pick our battles. Ernie wins this one. He doesn’t mind a scarf or a harness, so when it’s necessary to have him dressed we place his identification on him in this fashion.
In closing, what’s truly rewarding to see, is that Ernie understands that when the saddle, scarf or harness is on, he is working. That means – NO JUMPING or running around like a fool. This is a great thing for the rest of us, however – the very minute that item of clothing is removed – he reverts back into his jumping, running antics and barks like a fool. If you are local or in the area Please come visit Ernie and we hope you’ll enjoy him as much as we do. 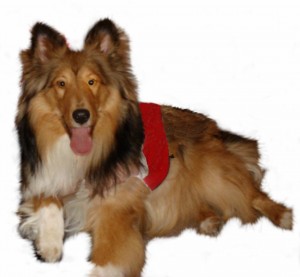